Home » Blog » Beauty Through the Ages: The Most Popular Beauty Trends Throughout History
Plastic Surgery Blog

Beauty Through the Ages: The Most Popular Beauty Trends Throughout History 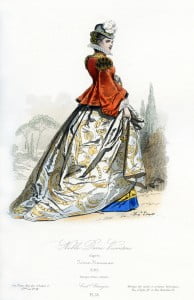 Popular fashion and beauty trends seem to come and go like the wind. One year short bobs are the rage, and the next it’s all about long tresses. Shoulder pads that seemed chic in the 1980s are now terribly outdated, and hammer pants are unlikely to make a comeback. New fashions and beauty ideals pop up to replace them all the time.

We decided to take a look at some of the most popular (and surprising!) beauty trends of the past. Join us as we explore beauty through history, ancient makeup trends, and historical fashion through the ages.

Synthetic makeup wouldn’t be formulated for thousands of years, but that didn’t keep ancient Egyptians from improving their appearance. The popularity of certain practices, such as applying kohl to the eyes and stain to the cheeks, was spurred by the need to protect the face from hot sun while working outside.

But what began as necessity was quickly adopted as an indication of spirituality. Beauty was a sign of holiness, so cosmetics became part of daily life in ancient Egypt. Makeup was even buried in tombs next to the deceased, emphasizing the idea that Egyptians considered cosmetics to hold religious qualities.

Curvy women with abundant hips and thick waists were considered the pinnacle of beauty during the Renaissance. The 15th century brought with it paintings of beautiful, voluptuous women, often nude or draped with flowing fabric. Stomach rolls and rounded derrieres were representations of financial and social abundance.

This permissive standard of beauty that encouraged women to indulge themselves didn’t extend to their tresses. In northern Europe, women plucked their hairlines and scraped their hair back into ornate headdresses. Blond hair was a symbol of aristocracy, so both women and men used bleach or onion skin to dye their hair.

Corsets were a daily requirement for civilized ladies during Victorian times. Women would bind their waists in restrictive corsets to give the appearance of an impossibly tiny waist that tapered out into fuller hips. Some women bound themselves down to a mere 12 inches! Women avoided sitting down in order to prevent cracked corset—or worse, cracked ribs.

Makeup was seen as something used only by prostitutes and other uncouth women. “Proper” women used a bit of face powder, but left the lipstick and rouge to ladies of the night. Hairstyles were demur, tightly wound buns, braids, or curls.

The full, long skirts of the Victorian era became outdated in the 1920s as a new generation of women adopted a more masculine aesthetic. Very slim hips and slight builds were stylish and some women even bound their breasts to appear flatter. Popular hair styles included short, straight bobs or tightly pinned waves.

As young women moved to cities by themselves for the first time, their independence extended to their appearance. The prim and proper look of the previous generation was viewed as old fashioned, and young women used makeup to assert themselves. Dark kohl eyeliner offered ladies a dramatic look, and many women used eyebrow pencils to appear more sophisticated.

Did you know…? Flapper fashion and contemporary feminism have an interesting overlap. As the modern bicycle began to flourish, cycling gave women much greater personal freedom—in addition to encouraging them to abandon impractical victorian dress. Female independence grew with their newfound mobility, which also served to impact popular fashion and beauty.

The 1930s and ’40s saw a rise in Hollywood culture as moving pictures became big business. Curvy ladies with slim waists came back into fashion, albeit with a far sexier dressing than their Victorian grandmothers—and with less binding!

Women imitated the glamorous appeal of actresses like Rita Hayworth and Jean Harlow. Chanel released its classic “little black dress,” and padded bras were introduced for the first time to help play into the pin-up aesthetic. Makeup took on a more classic look as women gave up pale skin for natural looking foundation, a heavily lined lid, and bold lips.

Many women in the 1950s made sure they were picture-perfect every time they left the house—a trip to the grocery store wasn’t complete without lipstick and a pressed A-line dress. Homemaking and raising children were the main focus of many women’s lives, and a husband’s arrival at the end of the day was an occasion for coiffed hair and a perfectly clean apron.

Toward the end of the ’50s and into the ’60s, women began experimenting with shorter hemlines and sleeker dresses. Bright colors overtook the pastels that were popular earlier in the decade. Makeup was subtle and encouraged a flawless complexion.

After the all-natural hippie look of the 1960s and early ’70s had passed, women took to makeup like never before. Neon eyeshadow and frosted pink lipstick were hallmarks of ’80s fashion.

As women broke the glass ceiling at work, their fashion took on more masculine angles. Shoulder pads created the illusion of a powerful frame that tapered to a belted waist. Bold earrings often accompanied the look. Big, permed hair with lots of highlights hit both the runways and small towns all over America.

Modern women do their own thing

Today, women can adopt any fashion they choose. Skinny jeans and heavy bangs are just as popular as retro sundresses and slicked back ponytails. Many women look to the past to discover their personal brand of beauty, and makeup is often used to outwardly express individual personality. From cosmetics to clothes, women can choose to follow trends or keep it basic.

Women now have the freedom to adopt a truly personal style, born not just of necessity or societal pressure, but of who they are and what they want to express. How are you making history? Share your fashion favorites in the comments below!