The ASPS statistics for 2011 confirm a trend that has been building in the industry for years. Minimally invasive procedures like Botox, lip enhancement and laser hair removal top the wish list of many patients in America.

Of the 13.8 million procedures performed by plastic surgeons in 2011, nearly 12.2 million of them were classified as “cosmetic minimally invasive.”

The figure seems to be increasing every year. The numbers for 2011 were 6 percent higher than 2010, despite economic woes affecting the American economy.

According to the ASPS, these 5 minimally invasive procedures are the most popular: 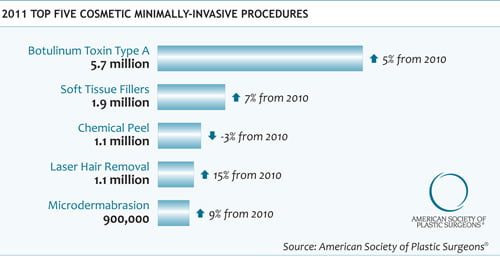